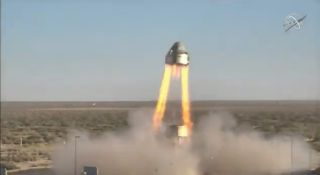 Boeing conducted a pad abort test of its CST-100 Starliner crew capsule on Nov. 4, 2019, at the White Sands Missile Range in New Mexico.

Boeing’s astronaut taxi remains on track for a December demonstration flight to the International Space Station (ISS) after passing a key safety test earlier this week.

On Monday (Nov. 4), the CST-100 Starliner capsule used its emergency-escape thrusters to get airborne during a “pad abort test” at the U.S. Army’s White Sands Missile Range in New Mexico. Technicians have now had some time to analyze the data, and the initial assessments are very positive, NASA officials and Boeing representatives said.

“This was a robust test of what the vehicle can do if we ever had an issue on the [launch] pad,” Kathy Lueders, manager of NASA’s Commercial Crew Program (CCP), said during a teleconference with reporters today (Nov. 7).

Boeing has been developing Starliner under a $4.2 billion CCP contract, which was announced in September 2014. SpaceX also got a CCP deal, snaring $2.6 billion to get its Crew Dragon capsule up and running. The goal, from NASA’s perspective, is to return an orbital human spaceflight capability to American soil; since the retirement of the space shuttle in 2011, the agency has been completely dependent on Russian Soyuz spacecraft to get its astronauts to and from the ISS.

Lueders described Monday’s test as a “huge step” and said further analyses will help Boeing and NASA prep for “the uncrewed mission that’s coming up and then ultimately to the crewed mission that we’re all getting ready for next year.”

That uncrewed mission, known as Orbital Flight Test (OFT), is scheduled to launch from Florida’s Cape Canaveral Air Force Station no earlier than Dec. 17. Starliner will make its way to the ISS, remain attached to the orbiting lab for about a week and then come back down to Earth.

If all goes well with OFT, a crewed demonstration mission to the ISS will follow sometime next year. Contracted, operational flights would come after that.

Crew Dragon has already flown its version of the OFT, spending six days attached to the ISS this past March on a mission known as Demo-1. Demo-2, which will carry NASA astronauts Bob Behnken and Doug Hurley to the orbiting lab, could launch early next year if all goes well with Crew Dragon’s upcoming in-flight abort trial and continued testing of the capsule’s newly redesigned parachute system, SpaceX representatives have said.

Starliner had an issue with its parachutes during Monday’s pad abort test: Just two of the three main parachutes deployed as planned. The company has determined what went wrong with the third main chute, said John Mulholland, Boeing’s commercial crew vice president and program manager.

“The root cause was the lack of secure connection between the pilot chute and the main-chute lanyard,” Mulholland said during today’s telecon.

Pilot chutes pull out main parachutes. On Starliner, the connection between pilot and main chute is established with a pin, Mulholland explained. The pin was not fastened properly on the main chute that failed to deploy, and the issue evaded detection before launch because the chute system was obscured by a protective sheath, he added.

Monday’s 95-second-long test “validates the performance of the chutes significantly beyond any design requirements, and it further validates the robustness of our spacecraft and our design,” Mulholland said.

He also addressed the red cloud of material that emanated from Starliner when its escape engines shut down. This plume was caused by about 1 gallon (3.8 liters) of leftover nitrogen tetroxide oxidizer, and it was completely normal, Mulholland said.

“The residual oxidizer that you saw was nominal performance,” he said. Overall, Monday’s pad abort was an “outstanding success from the spacecraft and the test team that conducted the test,” Mulholland added.

Have a news tip, correction or comment? Let us know at community@space.com.